The study of the relationship between structure and properties in materials is a longstanding paradigm in materials physics. In oxide materials, it has been demonstrated that picometer distortions of an otherwise perfect structure can have dramatic consequences on the electronic and magnetic properties. This sensitivity to structure is especially important at interfaces that are only a few atomic layers thick. Because of the small volume of material at an interface, we use the powerful synchrotron x-ray sources available at the National Laboratories to perform diffraction from the interfaces.

Among the advantages of synchrotron studies over studies with our in-lab Rigaku SmartLab diffractometer include the availability of x-rays with tunable energy (5 keV to 40 keV) and high brightness.

X-ray diffraction from surfaces and interfaces is measured along lines in reciprocal space called crystal truncation rods. The intensity along CTRs is sensitive to the structure [1,2] and chemistry [3,4] of the surface and interfaces between crystalline materials. By measuring multiple (CTRs) for a thin film (as shown in Figure 1), we obtain layer-resolved structural details. We initially analyze the CTRs with the coherent Bragg rod analysis (COBRA) technique, a phase-retrieval algorithm that enables convergence on a real space structure without a priori knowledge of the deviations from the bulk of the film and interfacial structure [5,6]. The analysis yields a 3-dimensional electron density map (EDM) of the atomic structure (see Figure 2). This EDM is in turn used to locate atoms in the structure as a starting point for fitting the CTR intensity using the kinematic approximation. 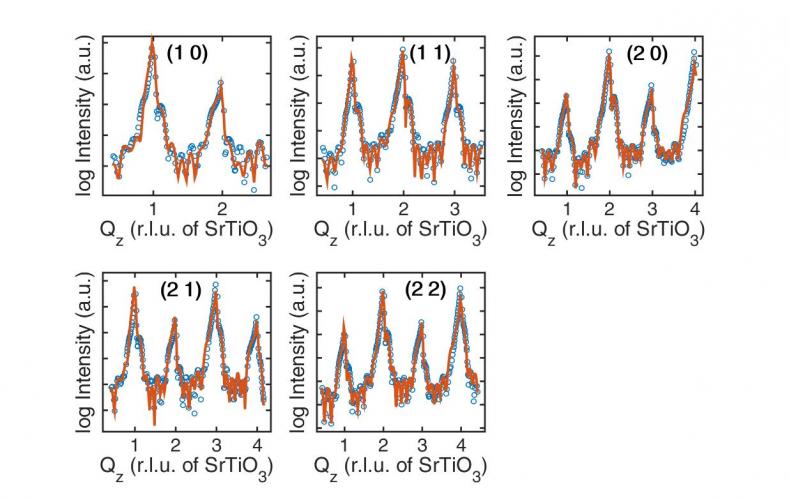 Of particular interest in these structures are interfacial distortions arising from polar interfaces. Such interfacial atomic-scale distortions set electronic and structural boundary conditions and play a crucial role in governing these materials’ novel properties (e.g. metal-insulator transitions at the critical thickness).[7,8,9]

Such distortions can be seen in a La0.5Sr0.5TiO3 thin film on SrTiO3 substrate. CTRs were measured at the Advanced Photon Source at Argonne National Laboratory and are used to calculate electron density maps. We observe relative displacements of the oxygen and cation z-positions in both the TiO2 and La/SrO (001) planes near both the substrate-film interface and the film-vacuum interface. These displacements create two opposing vertical lattice polarizations, which are strong at the interfaces and decay in the film’s interior.

Figure 2: In the electron density map, we observe relative displacements of the oxygen and cation z-positions in both the TiO2 and La/SrO (001) planes near the substrate-film interface and the film-vacuum interface.  These displacements create two opposing vertical lattice polarizations, which are strong at the interfaces and decay in the film interior.