Materials with strong electronic correlations (such as complex transition metal oxides) produce some of the most interesting condensed matter phenomena, including magnetism, metal-insulator transitions, and high-temperature superconductivity. In our group, we leverage the power of molecular beam epitaxy (MBE) to manipulate the quantum phases of such correlated systems. By growing ultrathin films and heterostructures with atomic precision and employing synchrotron-based x-ray techniques, we seek to understand the physics of correlated oxides, control their electronic/magnetic properties, and induce new quantum phases. In particular, modifying the structure of these systems on the picometer (10-12 m) scale can have a dramatic impact on the potential functional properties.

The rare-earth nickelates (RNiO3) comprise a model correlated oxide system. The nickelates display metal-insulator and paramagnetic-antiferromagnetic transitions, which can be tuned by composition, temperature, pressure, electric field, and more [1-3]. We have explored thin films and heterostructures composed of nickelates to control the electronic structure and transport properties and are extending these techniques to a variety of other fascinating correlated systems.

In the bulk, LaNiO3 is the only rare-earth nickelate that exhibits metallic behavior for all temperatures. However, in ultrathin films, a thickness-dependent transition to an insulating state emerges with a critical thickness of metallicity of approximately 3-4 uc. We have used high resolution synchrotron x-ray diffraction on MBE-grown thin films of LaNiO3 to determine the structural origins of this effect (picoscale polar distortions) and demonstrate the control of 2D conduction via surface termination and capping [4,5]. 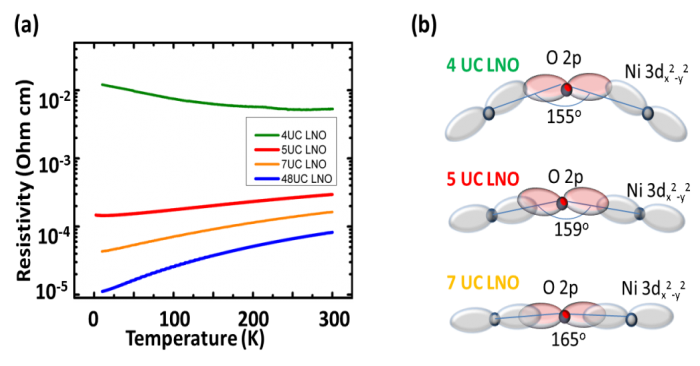 Figure 2: (a) Resistivity vs. temperature for LaNiO3 films grown on LaAlO3 substrates as a function of thickness A metal-insulator transition can be seen at ~4 uc thickness. (b) Schematic of the orbital overlap between Ni d and O p states for different thicknesses. The average bond angle becomes more distorted for thinner films due to polar distortions at the surface.

The bulk RNiO3 system has an electronic structure with 7 d electrons: 6 electrons completely filling the t2g states and a single electron in the doubly degenerate eg orbital manifold. The ability to control the orbital configuration and electron occupation in this system has been predicted to lead to novel ordered phases [6]. We have been applying unique heterostructuring methods with broken inversion symmetry and built-in charge transfer to strongly modify the structural environment around the Ni site. In this way, we have shown the ability to break the orbital degeneracy in the nickelates [7,8]. Looking forward, we are investigating how such methods can be applied to other systems to control magnetism, superconductivity, and more.

Figure 3: (a) Atomic structure of a LaTiO3/LaNiO3/LaAlO3 superlattice calculated from density functional theory and (b) electron density map derived from synchrotron x-ray diffraction data on an MBE-grown film. The experimentally determined polar distortions agree well with the theoretical predictions. (c) Schematic diagram of the orbital degeneracy breaking in these heterostructures.